We had our ping all planned for April 23rd.  We called the pub the Monday before to confirm numbers, only to find out the pub had not only changed names, but were closed for major renovations.  A few calls were made and emails were sent with a new pub location.  We met at the Drake and Firkin.


There was a good turnout, but for some reason we didn't take any photos except for the one below of Wendy, Steve and I.  Steve was the lucky winner of the On the Air subscription kindly donated by Mark and Peter.  This photo appeared in a later edition of the magazine. 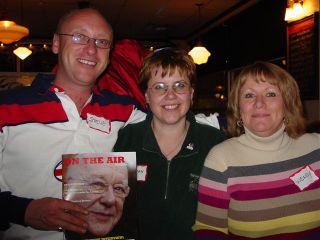