In the summer I heard that Alan Halsall & Andy Whyment were coming to Canada with a show in Markham.  I was very excited as Alan was the first Corrie actor I met in Manchester (2003) and I'd met Andy twice before (2008 & 2010), talked to him on the phone and had a drink with his parents.  I couldn't wait for November 20th. 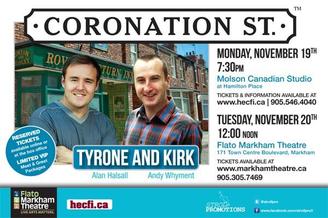 Al, my mom and I were ready to start the day.  We were picking up Corrie friend Patricia down the street and heading to Scarborough to meet our good friend Sheila for a late breakfast before the noon show.  We got in the car  all set to go................and the worst possible thing happened, the car would not start.  Not a good way to start the day and the panic started to set in "we have to get to Markham!'.  Thankfully dad had just left the house and actually heard his cell phone ring.  He returned to give us the boost we needed. 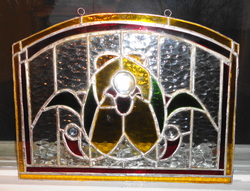 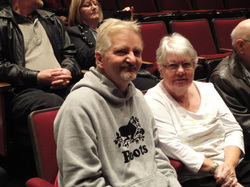 At our ping in October we had a raffle for tickets to the Tyrone & Kirk show.  The lucky winner was Glenn.  He took his mom, a long time viewer with him. 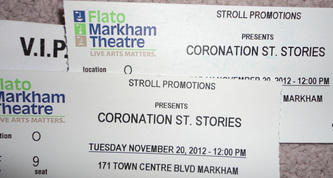 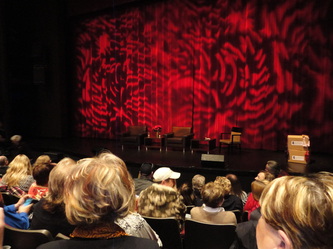 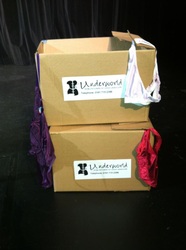 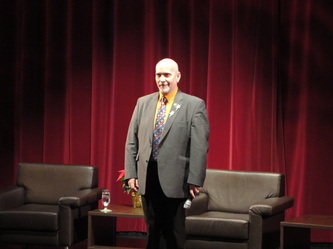 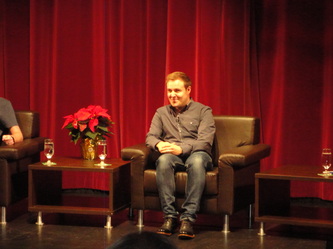 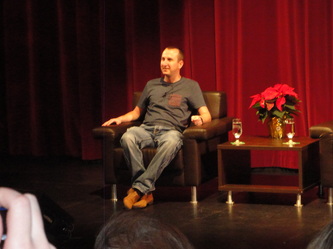 Host Neville MacKay walked out and the show started with a short video recap of the last 50 years.  Next thing our favourite Corrie actors Alan and Andy appeared on the stage.  Both looked fabulous.  For the next little while the two actors shared stories with us.  We learnt Alan is the biggest prankster on the set, does some AMAZING impersonations of other cast members (Ashley, Kevin & Dev), enjoys golf, is a vegetarian and so much more.  Andy is a big Manchester United fan, can sing and hopes one day Kirky and Beth get married and have some little Kirkies.  Andy is the wonderful father of two young children.  I can also tell you he has a great dad as I've been lucky to meet him a few times.  Alan is happily married to Lucy Jo Hudson, father killing Katy Harris from Corrie a few years ago.


They both LOVE their jobs and hope to be on the show for many years.  (I hope so too!) 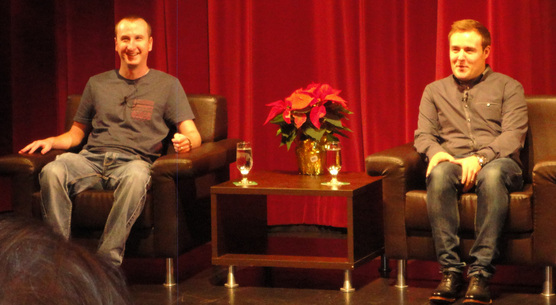 After a short intermission  Alan, Andy & Neville returned to the stage and it was time for questions from the audience.  This was our third show, so I decided to stand and ask a question.  I told Alan we'd seen Margi Clarke (Jackie Dobbs) in panto last Christmas and would he like to see her back.  I then asked Andy if he could sing for us.  He sang a bit of Mustang Sally.   What a great voice, I would have loved to have heard more.

It was a very entertaining afternoon.  We laughed a lot and heard stories you would never hear anywhere else about Coronation Street and the actors.  One thing that surprised me was hearing that Bill Tarmey (Jack) hated those pigeons.  In one scene they had to tape one to his shoulder.  Alan & Andy have been good mates for many years and they made a great duo on the stage.  What you see is what you get............what us fans saw were two lovely, fun, entertaining down to earth guys who had smiles on their faces all afternoon.  Alan & Andy seemed to be enjoying the Canadian fans as much as we were enjoying them.

After the show ended the VIP fans got to stay in the theatre and participate in the meet and greet. 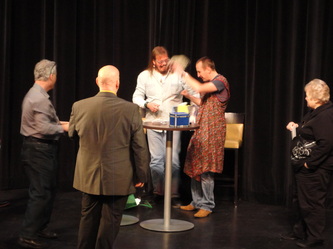 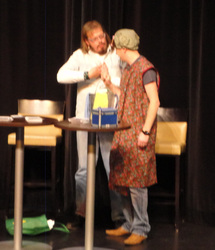 I met Corrie fan Jay on facebook last year.  I got to meet him in person in March at the Stroll Promotion William Roache show.  Jay organizes pings in Huntsville.  At their last ping fans came dressed up as Corrie characters. Jay made a fabulous Hilda Odgen.  Above you can see Andy in Jay's Hilda costume!

Later we saw a lady pregnant with twins have Alan & Andy sign her stomach!!!  Will the boy twins be Alan & Andy or possibly Tyrone & Kirk???? 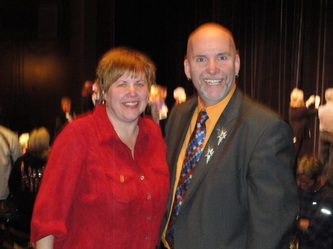 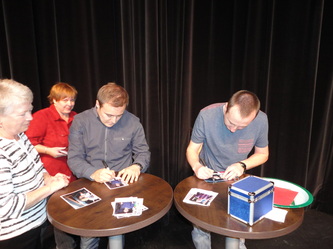 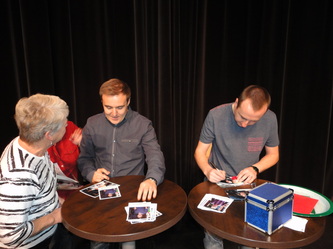 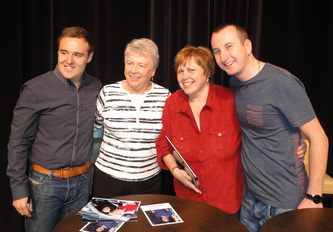 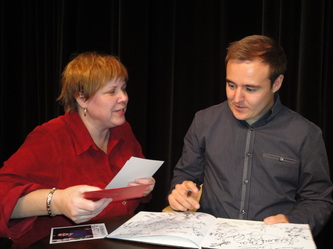 My mom was at her first show and wanted me to be with her during her meet and greet and go in her photo. We were each greeted with a big hug from Andy & Alan and I started chatting.  I had so much to say, but knew they had a plane to catch in a little while.  There were still 3 or 4 fans waiting to meet them.  Mom  then mentioned it was her time and after Alan commented with a laugh 'what it isn't even your turn yet'  I went to the side to wait.  I know I rambled trying to get out what I wanted to say, but I was just soooo excited.  I'd been waiting a few months to see them.  I showed them each a photo from the times I'd met them and they both knew what years by their vehicles in the photos.  I also showed Andy a photo of me and his dad in my book.  They signed my book, plus the Newton & Ridley tray I had decided to start getting signed. 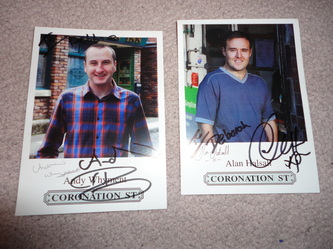 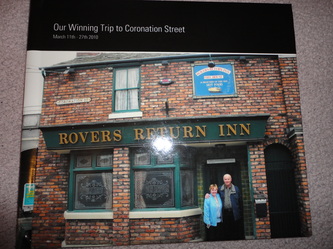 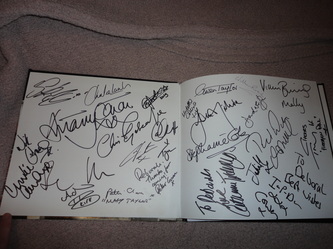 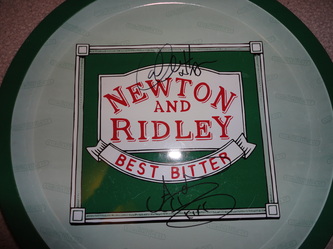 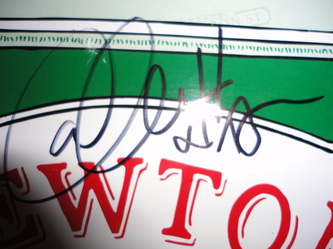 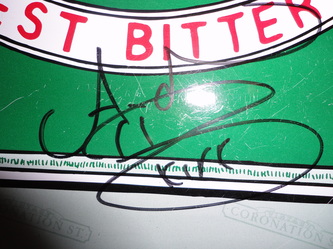 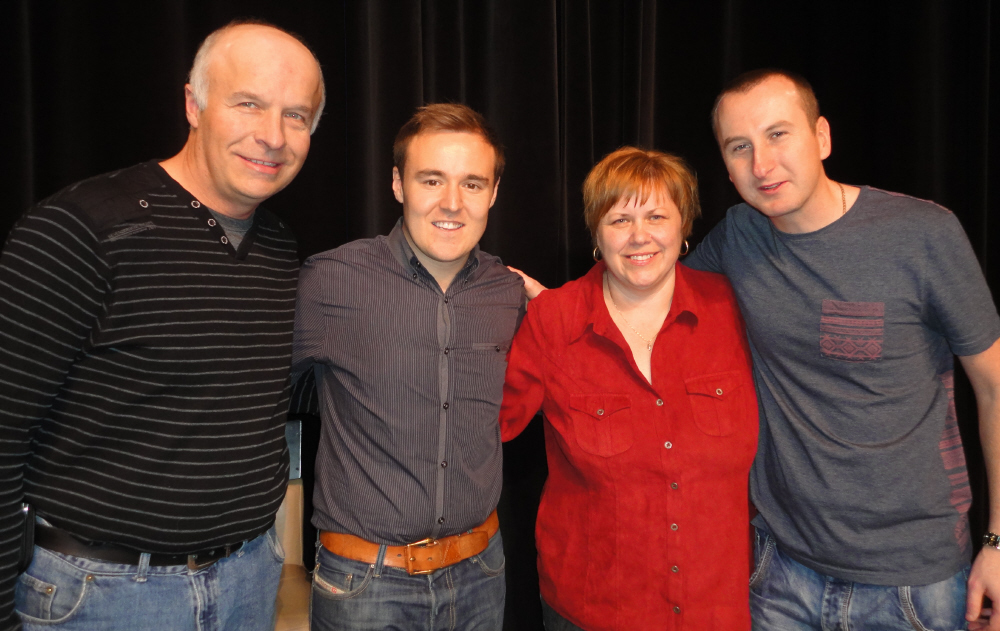 I cannot say enough good things about this show.   We were very lucky in Ontario to have shows in Hamilton, Markham and Ottawa.  For the last few months I've read a lot of complaints online from fans because there was no show in Toronto.  All I can say is those fans that didn't make the extra 20 minute drive to Warden & Hwy 7 missed one amazing afternoon.  After seeing The Croppers, William Roache and now this show, we would drive a few hours to attend a Stroll Promotion Coronation Street show.


I would like to say a HUGE THANKYOU to Stroll Promotions for bringing the Coronation Street stars to Canada.  I know it takes a lot of time, work and risks in bringing these shows to the Canadian fans and I truly appreciate it.  Corrie fans are very lucky to have someone like you to organize these shows.  Your shows are always first class!!!


Also a HUGE THANKYOU to Alan Halsall and Andy Whyment for coming to Canada.  You were fabulous and made a lot of fans very happy this week.