We took the hour long train ride to Manchester on March 15th, 2010.  While waiting to check into the Marriott Victoria & Albert Hotel, we went to the studio gates hoping to meet some of the actors.  There were a lot of paparazzi there that day and I was snapped with some actors.  Two days later I was asked a few questions (not by Brian Roberts whose name is on the article, but by a lady) and told there was a chance I could appear in a newspaper.   The following day this article appeared in the Daily Mirror.  Of course nothing I had said went in there and it was full of errors.  Let me start by saying I was not 48 (I was 42 and 6 years difference is huge at that age), I have not had 15 holidays at the gates, I do not camp out at the gates .....and it goes on.  It was fun though and made for an exciting few days! 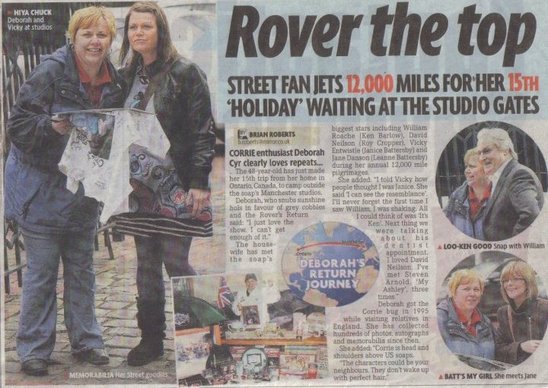 You can read the article online here 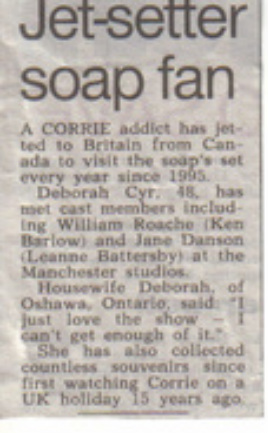 The same day this article appeared in The Sun.  That morning I was at the studios with my friend Emma and I kept  receiving texts from relatives and friends "I've seen you in the paper." "They've got you as 48!", "you can't see your cold sores."

Next thing three people walked passed us and were staring, but they continued on to the line up for the Jeremy Kyle show.  (not far from where we were.)  After a few minutes the three young people returned, holding the Daily Mirror and one of them said 'It's you.  I was reading the article on the train and recognized you!'  I finally got to see the article I'd been hearing all about.  The young guy said seeing me was more exciting than going to the Jeremy Kyle show.  I posed for a photo and signed his newspaper.

That afternoon we had our winning tour of Coronation Street.  The receptionist at Granada said a friend had told her she'd heard about a lady that camped out at the gates to meet the actors...and here I was!   We walked into the Rovers and 'It's gonna be a Good Night' by the Black Eyed Peas started playing.  I wasn't used to a cell phone and had forgotten to turn it off.  It was a message from my cousin..'Seen you in the paper, how come I haven't been invited to your last 6 bdays?'

The following day I went to the Emmerdale studios and Chris Chattell (Eric Pollard) said 'I wondered when you would be coming to visit us, I heard them talking about you on radio 1 yesterday and knew it was you! (this was only my 2nd time at Emmie) 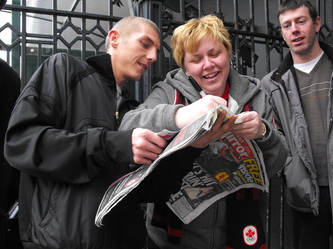 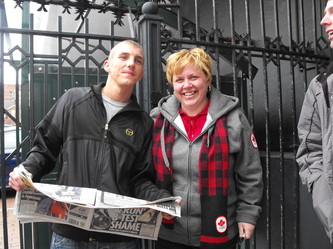 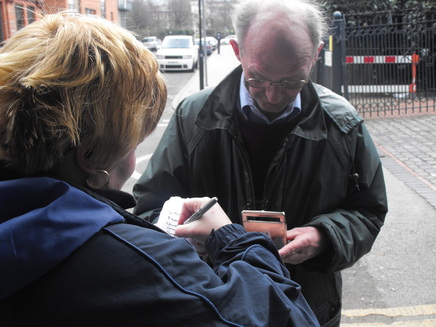 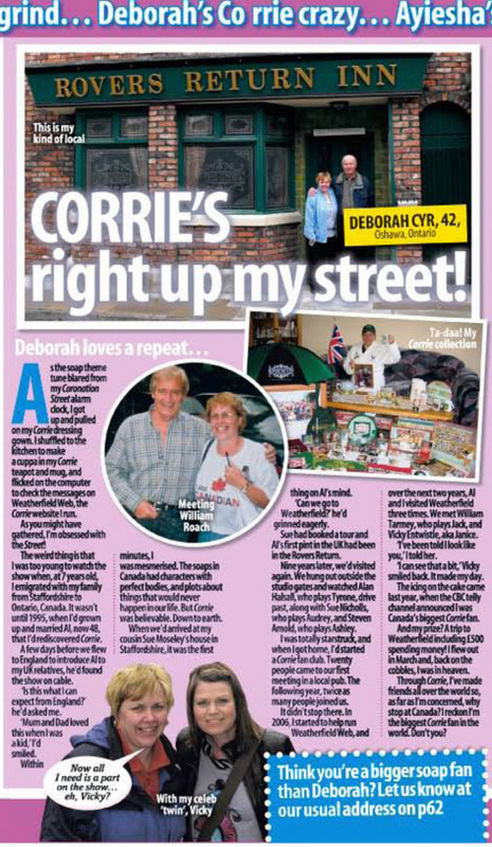 Later on that day after appearing in the Daily Mirror and the Sun, I went online back at the hotel.  I was shocked to have so many emails....magazines, papers and even a morning talk show wanted me to contact them.  I was overwhelmed.  In the end I did an exclusive interview for Pick Me Up Magazine.  It was in the April 17th edition.  I did talk to the morning talk show people, but with not having much time left on our trip nothing could be arranged.  They did say to get in touch next time I'm over....but I probably won't.

A year later I had an email from Pick Me Up magazine and they have asked if they can reprint my story in the Best Of Pick Me Up (40 stories from the year) which will be out May 19th, 2011. 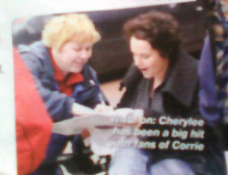 On Feb. 5th, 2011 I had a message on facebook from my friend Steph.  She said she'd seen my photo in a magazine.  What photo and what magazine, I wanted to know.  Turns out there was a photo in Inside Soap of Cherylee Houston (Izzy) and I.  It must have been snapped by the paparazzi at the studios that same day last March.

My Pick Me Up story was one of the 40 chosen to be in the Very Best issue. 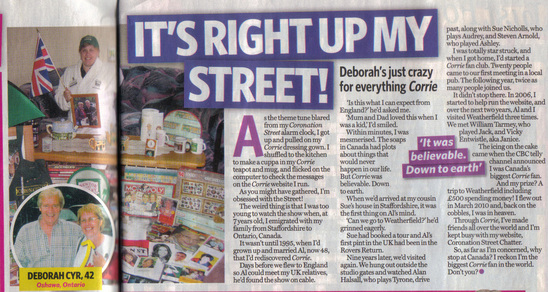 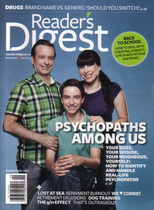 Our Street by Erin Phelan. "Now celebrating its 50th anniversary year, Coronation Street is among television's longest-running dramas, with millions of devoted fans worldwide. How has it captured the hearts of so many Canadians? 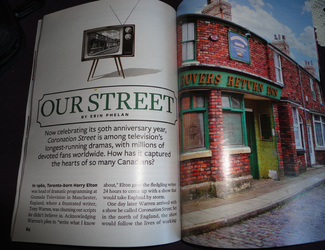 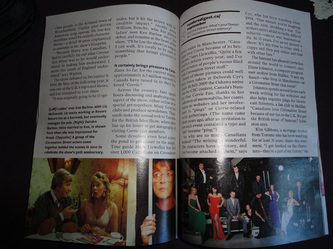 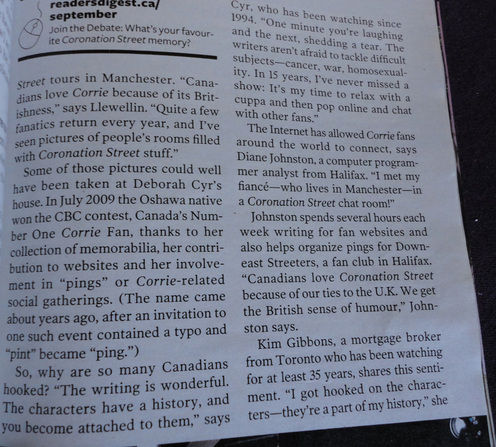 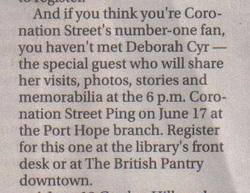 Promoting the library ping in Port Hope where I was a guest speaker.