In the fall of 2011 we had a postcard in the mail from Stroll Promotions letting us know that William Roache was coming to Canada in March 2012.  Ottawa, Toronto, Hamilton, Vancouver, Victoria and Halifax were the lucky cities. It was William's first tour in Canada...and most likely his last as he turns 80 next month.   We put the postcard on the fridge and have been looking forward to the show. 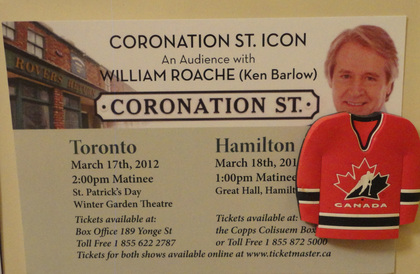 We have been lucky and met William a few times in Manchester.  William is a cast member that always finds the time for Corrie fans.  Even though he is the most senior cast member he'll usually stop for a quick chat, pose for a photo and sign an autograph.  The last time we met him was in January as we were having a tour of the studios and told him we would see him in Toronto.  Today we were looking forward to hearing stories all about his life.  Here are a few photos from previous times we've met him: 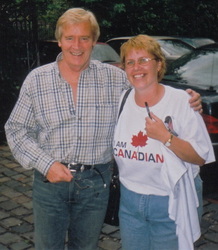 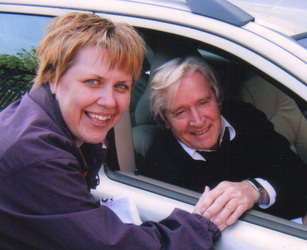 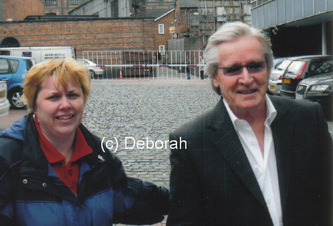 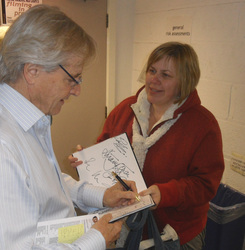 William was in Toronto on St. Paddy's day.  A number of friends had tickets and we decided to meet at a pub for lunch before the show.  Twelve of us met for lunch including Nadine who had taken the train from Kingston plus Karen & Steve  who had come all the way from Saskatoon for this show.  We went to the Duke of Richmond. 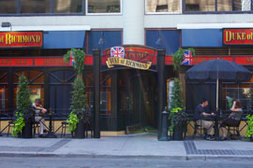 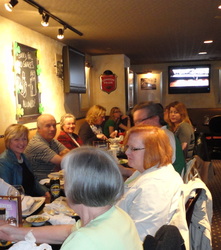 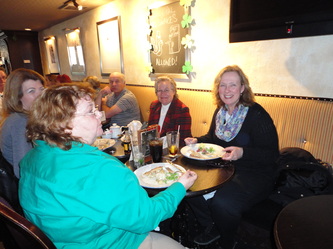 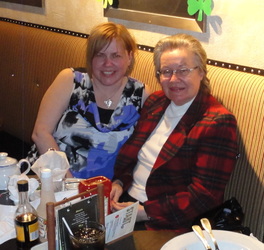 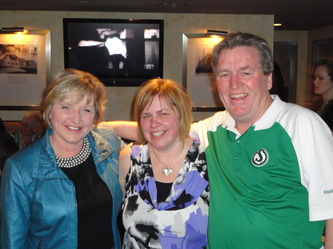 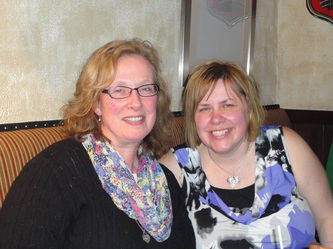 After lunch we headed to the Winter Garden Theatre which was only minutes away.  As we approached the theatre we noticed the William banner flying outside. 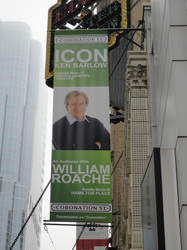 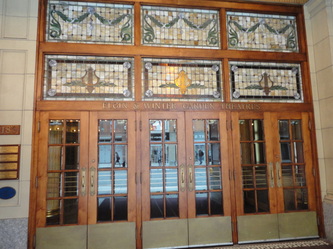 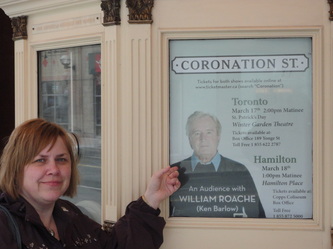 When we walked inside, the theatre was beautiful!  I have never seen anything like it, breath taking!  I knew right away this was the perfect place for a Coronation Street icon!

Last year Stroll Promotions brought 'Roy & Hayley' to Canada.  We loved that show soooo much and still talk about it to this day.  We wondered what William would be like as he had his one man show the first half, no host or other Corrie stars on stage with him?  Would we enjoy it as much as we did the Audience with the Croppers? 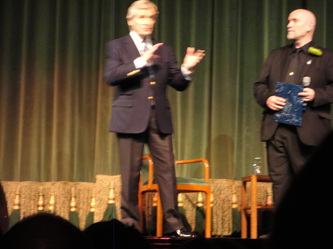 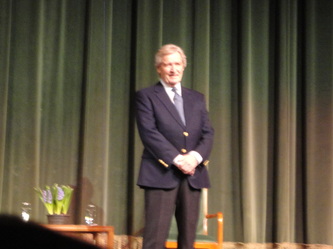 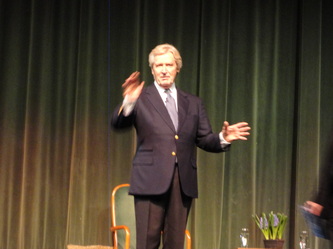 The second part of the show was made up of fan questions.  William said he would honestly answer any questions asked.  Neville walked the audience finding lots of fans who had questions.  Fans asked 'do you have any plans to retire?  What is Deirdre like? Have more than one dog played Eccles?  What does William read?  Can you share a Blanche story, whose idea was it to have your two sons on the show.............and the list goes on.  Most of the questions were good, but there were one or two I thought hmmmm......  As the show came to an end the fans cheered and rose to their feet.

To answer the question:  Would the show be as good as Roy & Hayley last year............the answer is YES!!!!  It really was an amazing afternoon.  As we walked up to the VIP area I heard many fans say 'I could have listened to William talk for a few more hours.'  I agreed with them.  William was fabulous and the fans definitely got their moneys worth !!! 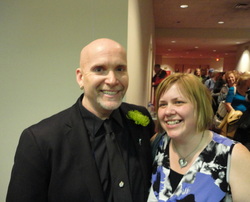 While waiting to see William I had to have a photo with Neville!  Neville is the tour guide for  Coronation Travel .*  If you have ever dreamt of walking the cobbles this is the tour for you.


Our VIP time with William: 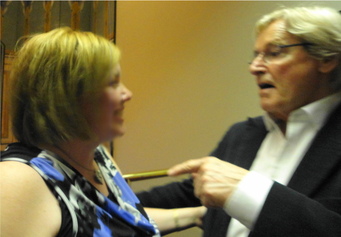 When I told William we had met him in January at the studios he replied "YES, I remember you!" 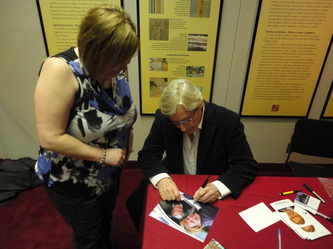 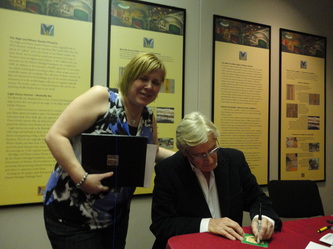 William greeted the ladies with a kiss on the cheek.  He took his time with each fan and really made them feel like a VIP.  William signed my 50th anniversary book, my favourite photo of us and a newton and ridley beer mat which I got at the Rovers in Jan.  As we said goodbye, I thanked him for playing the role of Ken Barlow for the years he has and he gave me a hug goodbye.  This is a St. Patrick's Day we will remember for many years! 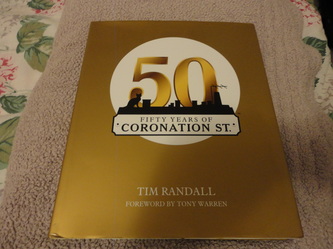 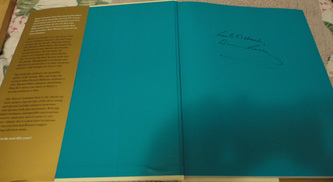 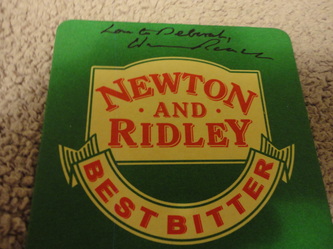 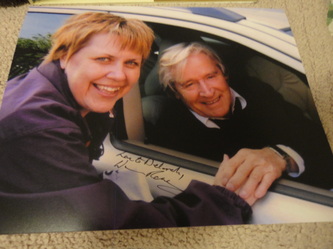 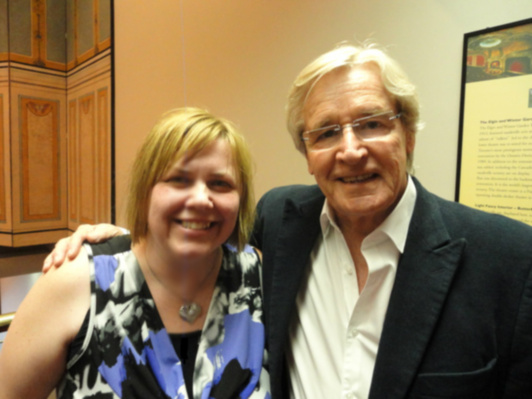 ....to William Roache for putting on such a wonderful show, plus playing the part of Ken Barlow for 51 1/2 years.  The Barlows are the best!

....to Neville for being such a fabulous host.

.... and HUGE, HUGE THANKS to Stroll Promotions for bringing William to Canada. Your shows are first class!!!  You make a lot of Canadian Corrie fans very happy.