Views of the street from the Museum of Science & Industry 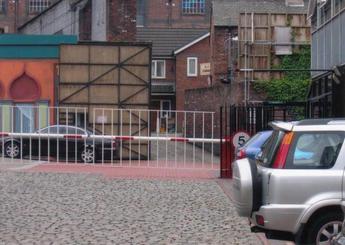 
On May 17th, 2007 we went to Manchester for the day to see a Coronation Street art exhibit put on by Jayne Tunnicliffe. (Yana).  Afterwards we took a walk to the Arndale Centre where we were to meet our niece in two hours.  While walking around Al said, 'why don't we go to Corrie, it's lunch time and we might see some of the cast.'  We'd only been at the studios 3 days before, but I wasn't going to say no.  I had my 'Corrie tshirt' and pens in my bag...just incase.

We weren't there long and met Jane Danson (Leanne Battersby) and Craig Charles (Lloyd).  After an hour Al & Louise were ready to go, but I wasn't.  I think we ended up staying another hour and I even tried bribing them with different things to stay longer, but it didn't work.  Al suggested we go to the Museum of Science and Industry minutes from the studios to get one last glimpse of the street.  We'd only walked on those cobbles 3 days before.

It was good timing as they were filming on the street and we watched for a while.  A Streetcars taxi pulled up in front of the Kabin where Carla, Liam and Ryan got out.  We saw them do the same scene at least five times.  Nine months later, we spotted that scene on our screens.  Carla, Liam and Ryan were returning from Ireland after being at Paul's funeral.  It was only two seconds long, but it was nice to know we'd seen them film it. 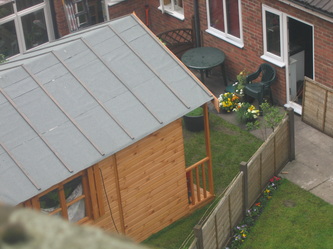 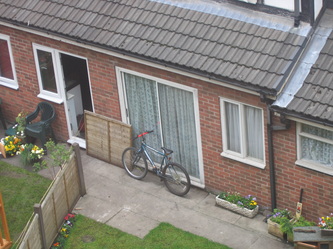 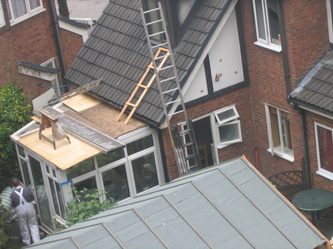 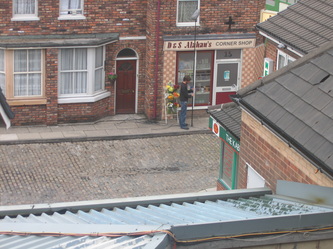 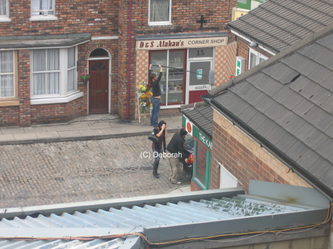 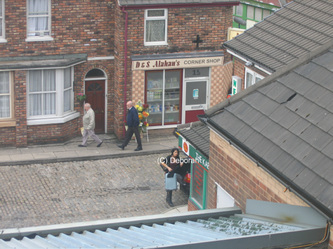 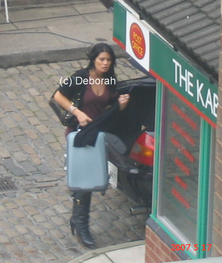 You can see Darryl Morton's shed in the first photo and next door is a bicycle at the Platts - not sure if it is David's or one of the workers?  In the third photo is the Peacock's house.  The week or two before they had filmed the scene where Casey set their home on fire.
****When we went back to Manchester in 2008 we went to the museum again hoping to see some action on the street. Unfortunately they had blocked the windows so you could no longer see the street. ****

If you want to see photos taken from the actual street:  click here