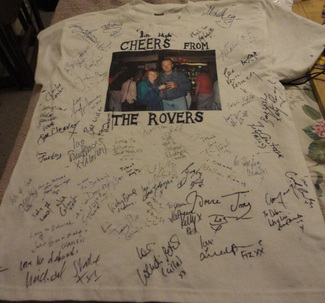 Each year we'd go to the British Isles show in Toronto and I'd get a signed cast card.  In 2001 decided I wanted something different signed.  I had this tshirt made up of Al and I in the Rovers.  Curly was the first to sign the tshirt, followed by Geena and Maria.

I took the tshirt with me to Manchester in 2003 where I added 9 more signatures to it- Audrey, Sunita, Tyrone, Jason, Ashley, Ken, Norris, Kevin and Mike Baldwin.  12 signatures!

2008...tshirt is back in the Uk.  This time Rosie, Bill Webster, Harry Mason, Tony Gordon, Kirk, Tina, Julie, John Stape, Mel Morton, Liam (who signed it on the back), Jerry & Teresa Morton added their signatures.  44 signatures. 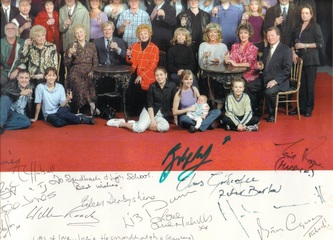 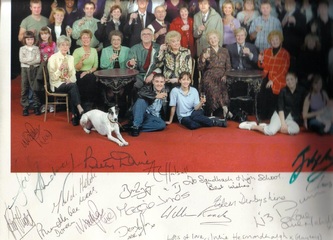 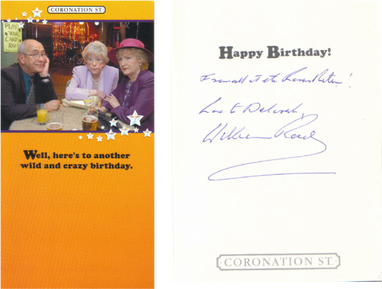 The year I turned the big 4-0, I had a very special birthday card.  Not only was it a Coronation Street card, but it was signed by William Roache, aka Ken Barlow!!!

In case you can't read his writing it says

Happy Birthday
From all at the Rovers Return!
Love to Deborah,
William Roache. 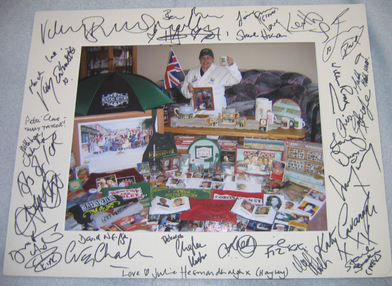 I wanted something special to remember my winning trip as Canada's # 1 fan.  I decided to get the actors I met that trip to sign the matting of this photo.  I met quite a few!! 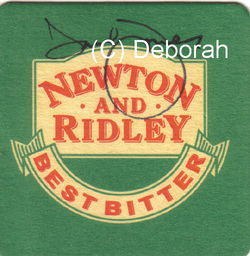 Every summer twice a week they have free concerts at Del Crary Park in Peterborough, Ontario.  In 2010 Davey Jones was there.  Al and I decided last minute to go.  I didn't know whether I'd get to meet Davey after the show or not.  I had to try, afterall Davey had played Ena Sharple's grandson Colin.  On the way out the door, I grabbed a newton and ridley beer matt just in case.  I didn't know what else he could sign.

After the fabulous concert we went to a spot where many other fans were waiting by his trailer.  It took him a long time to get out.  Others had all sorts of photos to sign and here I was with a beer mat.  LOL 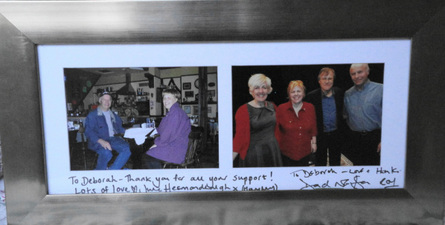 On April 21st, 2011 we went to an Evening with the Croppers.  We had VIP tickets and I wanted to get something special signed.  Julie & David signed this matt and I put a photo of us from that evening in it.  I also put a photo of Al and I sitting in Roy's Rolls in 2008. 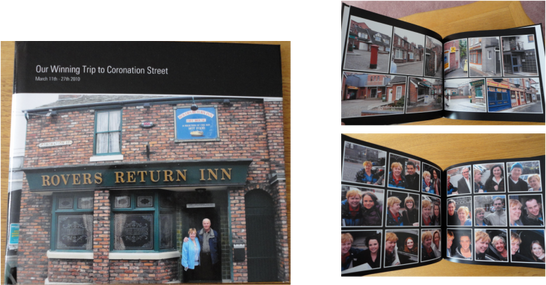 For Christmas 2010, we treated ourselves to a new camera.  Along with the camera we had a coupon to make a kodak photo book online.  I made one of our winning Corrie contest trip to Manchester.  I was very pleased with how it turned out.  I've decided this is now my item to get signed.  So far Molly has signed inside the cover and Roy & Hayley signed inside by their photos.  I'm hoping to add a few more signatures to it in Dec/Jan.
Jan. 2012- Went on holidays to England.  When we arrived the book only had one autograph, managed to get a few while I was there.

I do have a number of letters that I have received from cast members.  I don't post them as they are personal. 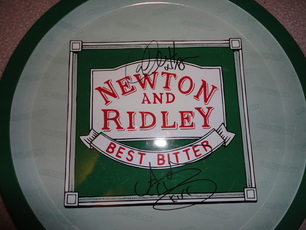 Here are my latest autographed items: 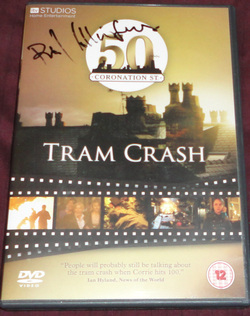 I got this DVD for a bargain at poundland.  A few days later ex-producer Phil Collinson happened to park his vehicle at Granada Studios and I managed to get him to sign it.