On Dec. 18th, 2011 we left Toronto airport for Manchester.  We had a few Coronation Street related things planned.  We had tickets to see two ex-Corrie stars in pantomimes.  We planned to spend a day at the gates trying to meet a cast member or two.  We also had plans to meet up with some Coronation Street friends for a meal.

Before leaving Canada a number of Corrie friends asked if we would be having a tour this trip.  I assured them we had no plans to walk the cobbles.  However, that changed the day after I arrived in England and received a message from a cast member inviting us to join them on the street Jan. 4th.  I was very excited as I hadn't expected it.  Just to let you know, I have been on the street a few times and never have I asked for a tour and never would I.  This is not something cast members usually do.

We met our friend just before noon.  After a big hug, we checked in with security and next thing we were walking on the famous magical cobbles again.  No matter how many times you have walked on there before...it never gets old.


(**you can click on photos to make them bigger**) 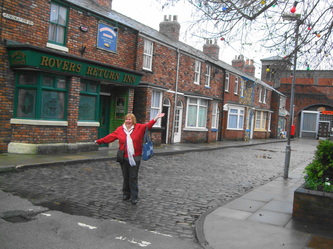 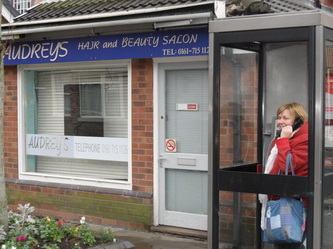 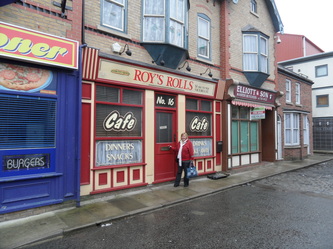 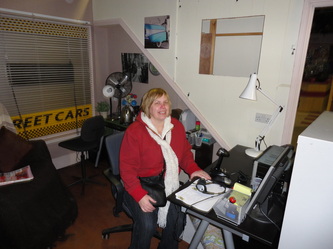 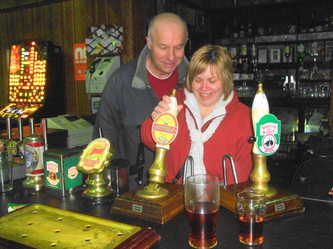 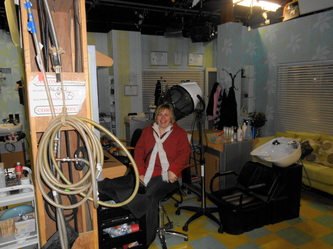 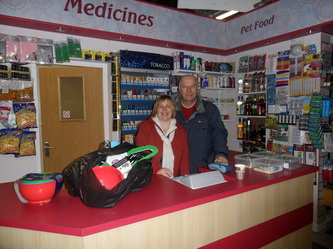 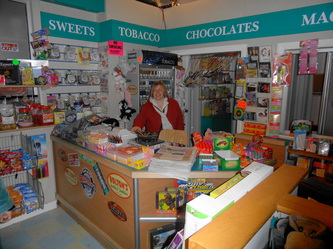 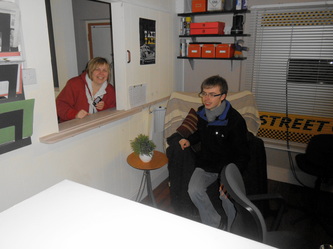 We did a few things on this tour that we hadn't done in previous ones.  We watched a few minutes of filming.  We saw Stella, Eva (wearing a bright pink floral revealing dress) and Nick in the Rovers.  Minutes after the final cut I was behind the bar pulling a pint and tasting the sweet beer.  We also walked down the ginnel looking in all the backyards.  We then went to the costume department, which we'd not been in before.

My favourite moment of the tour was when we had a photo in Roy's Rolls with Roy, Hayley and Sylvia.  I wanted to pinch myself.  It's a moment I'll never forget with three of the nicest people you could meet. 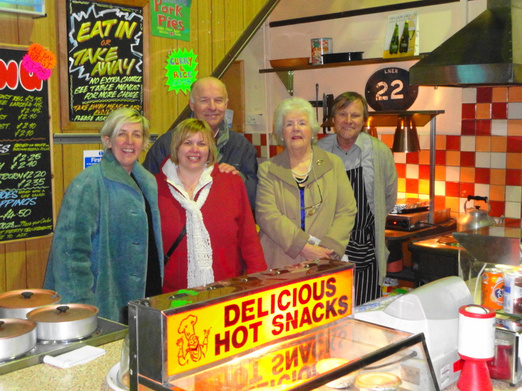 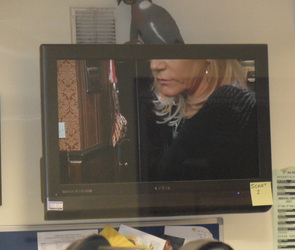 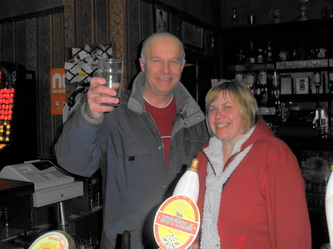 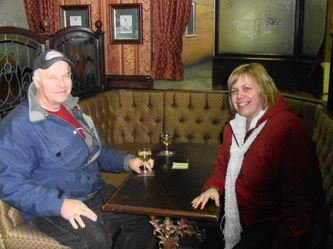 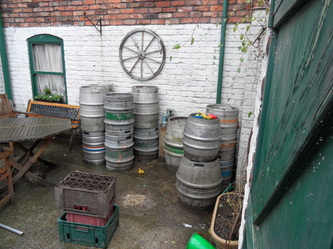 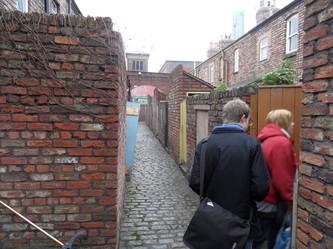 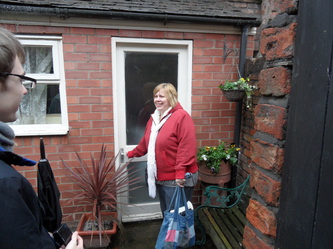 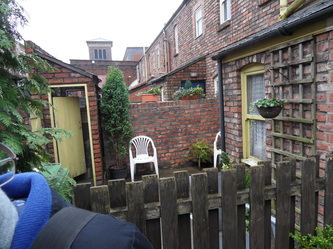 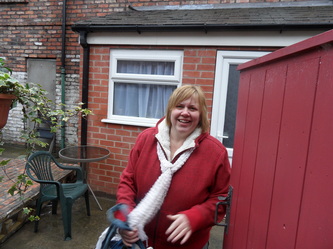 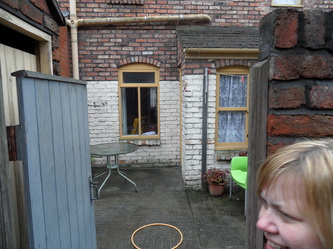 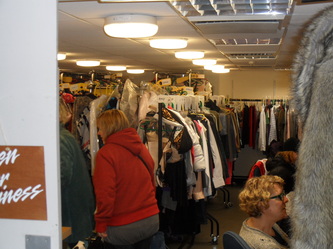 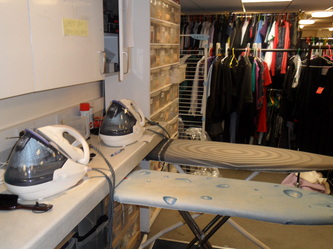 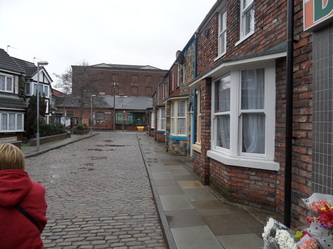 No trip to the street is complete without a photo in front of the Rovers.  This time we had a special Coronation Star join us. 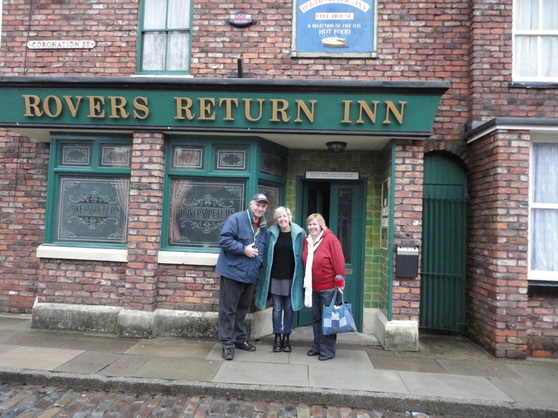 We enjoyed every moment on the street.  However when I left the studios later that day I couldn't help but feel a little sad thinking this would be our last time at Granada Studios before they move to Salford in 2013.  We've got lots of wonderful memories though.

We met a number of actors this trip, many we'd not met before.  Marcus, Chesney, Owen, Sylvia, Brian, Fireman Paul, Eva, Stella, Frank's mother (the wonderful 'Aunt Peg' from Heartbeat) were all new.  Plus we met Corrie legend William Roache, Ken Barlow who we've met a number of times now.  William will be coming to Canada this March.... (Click here to read about the William show.)


The actors and actresses we met.
The actors that are no longer on the show.


Away from the Street we met the wonderful Steven Arnold (Ashley Peacock) in York at our first pantomime.  We saw Margi Clarke (Tyrone's mom Jackie Dobbs) in Sleeping Beauty in Sheffield.  What a wonderful lady.  At the Manchester market 'Jamie Baldwin & Violet' were behind Al in the line up for mini pancakes.  They were with their daughter so we did not bother them as they were enjoying family time.  On Friday night Shobna Gulati (Sunita) was at a local pub in my hometown.  I was shocked to see her in Stafford.  Again I was a good fan and didn't ask for a photo or autograph as it wasn't the right time or place.  We have had the most wonderful holiday with family, friends and of course Coronation Street stars too!

Please let me know you were here. Sign my guestbook at :  http://deborahscorriepage.weebly.com/guestbook-please-sign.html


A very big special THANKYOU to the wonderful Corrie star who took us on the Street.  You are a lovely person and we will always remember the kindness you showed and the special time we spent with you.  XX