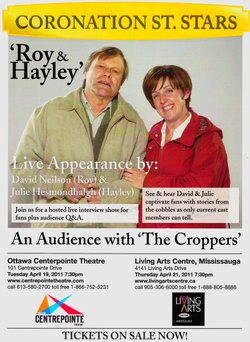 Last December (2010) tickets went on sale for 'An Audience with the Croppers'.  For a few years I had heard about these Corrie evenings down east and always hoped they would come to the Toronto area.  Mississauga was finally getting this event, April 21st, 2011 thanks to Stroll Promotions Limited.  We have the British Isles show here, but that is a quick two minutes with the Corrie star nothing like listening to an evening of stories and sharing laughs.  We got our front row VIP tickets the day after they went on sale.  The VIP tickets included a special meet and greet after the show.  I'd met David Neilson (Roy) and Julie Hesmondhalgh (Hayley) twice before in Manchester and knew they would put on a good show.

Before the show we met a few friends at an Irish Pub to catch up, chat Corrie and get ready for the evening's event. I said hello to quite a few friends in the lobby of the Living Arts Centre before heading into the theatre.  Finally it was time to take our seats.  Sitting at the front was amazing.  After a special Corrie video montage, host Karl Wells came out.  Karl who works for CBC in Newfounland is a long time fan of the show and made the perfect choice for the evening's host.  He talked about David and Julie for a while, before one of Corrie's favourite couple arrived on the stage to loud cheers. 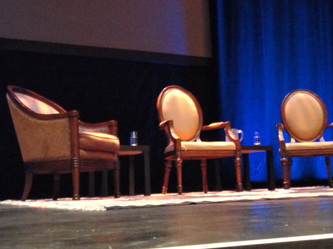 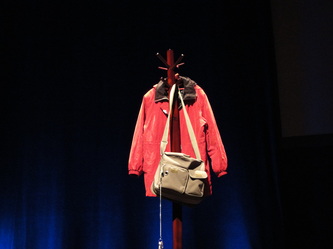 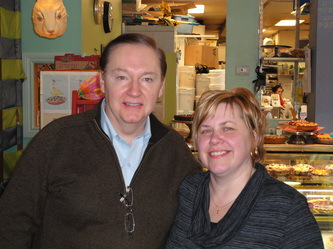 Karl took turns asking Julie & David questions.  They were both fabulous sharing stories, very entertaining.  The large crowd would often burst into laughter or start clapping.  The two stars did get into character twice...first Julie showed us the famous Hayley shuffle, then David showed us how he got into character...the anorak, shopping bag and hunch the shoulders.  We heard stories that you would never hear anywhere else, tales of pranks, bloopers and so much more.  It really was wonderful, I can't say enough good things about it.  I think David surprised a number of fans with his answers to some of his questions....he is very funny!  I had a big smile on my face when they mentioned fans at the gates and the paparazzi as I could picture it.  That's where I had met them before.  Julie's husband and two daughters were in the audience and you got a feeling of how much Julie's family means to her. 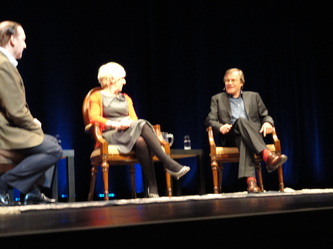 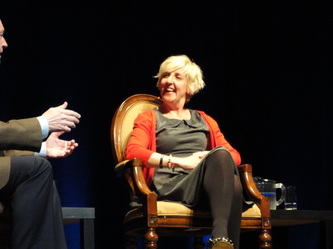 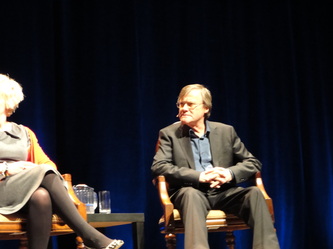 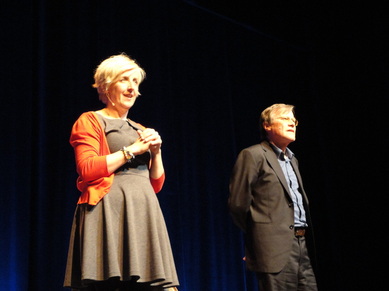 After a short intermission the show continued.  This part of the show was questions and answers from the audience.  There were lots of great questions asked.  Julie & David also made sure they included the fans sitting high up in the second level balcony seats.  Although at one time David joked 'I bet you are wishing you'd have paid extra for the seats down here.'  LOL

At the end of the night fans stood on their feet to thank David & Julie for a wonderful evening.  They had been perfect guests.  This show may have cost a bit more than the British Show, but there is no comparison between them.  This format is excellent- no waiting, comfy seats, 2 hours with the Corrie stars and so much more.  It was worth every penny.  Fans left feeling they knew more about David, Julie & Coronation Street and they had big smiles on their faces to show it.  I can't wait till next year.   Thankyou Stroll Promotions for bringing this event to the Toronto fans!!!! As the fans headed out the theatre, the VIP fans remained in their seats.  We were then invited up to the stage in small groups.  Julie greeted everyone with a warm hug and David had a big smile.  I'm positive Julie & David enjoyed the evening just as much as the fans.  They posed for photos and signed autographs.  I have to admit we had an extra long time up there, but David was thrilled with my book I had made about my winning trip and kept spotting things in it to chat about.  We almost forgot to have our photo taken and I did forget to get a signed cast card.  Besides my book, I did get them to sign a photo matt.  Inside this frame is now a photo of Al and I sitting in Roy's Rolls and another of the 4 of us taken this evening.  It will be a wonderful reminder of an amazing evening. 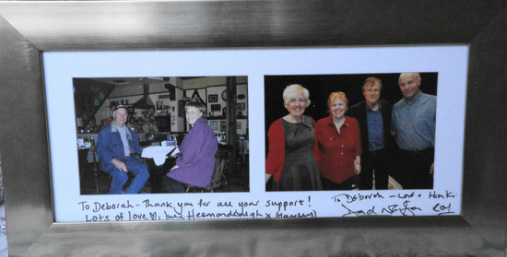 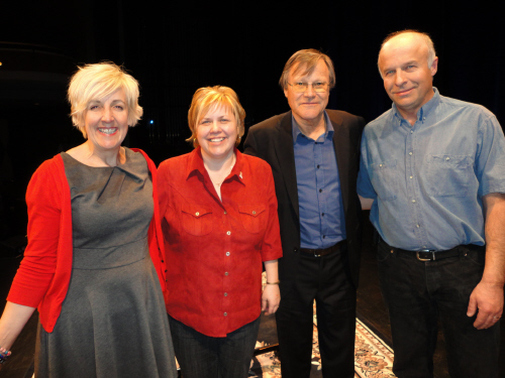 The following morning Al and I were treated to something very special.  We were invited by the organizer of the event to join them to say goodbye to Julie & David.  Since I first heard about the Cropper evening coming to Toronto,I have been spreading the word....only because I have wanted something like this to come to Toronto for a while. When I love something, I will give my support towards it and that is what I did, expecting nothing in return except for the show to come back to the area next year. However, the organizer thanked me by inviting us to the goodbye meeting.  Besides David, Julie & family, there were 5 others.  We walked in and Julie immediately got up asking us what we wanted to drink and eat at this small bakery/cafe in downtown Toronto.  I even said to her 'I feel like we are at Roy's Rolls, but you are not working and do not have to get up and serve us...you are our special guests said Julie.'  We had a cuppa and a hot cross bun as it was Good Friday.  The 5 others sat on one end of the table having their own conversations, Julie's husband kindly took the girls to the park and Al, David, Julie and I sat chatting for quite a while.  They are lovely people.  They made us feel very special and not just fans.   It is something we will never forget.  We've had a lot of memorable Corrie moments over the years and this is right behind our surprise tour of the studios in 2008.  Thankyou Andrew for not only bringing this show to Toronto, but giving us this wonderful gift this morning.  We truly felt very special.  To David & Julie, thankyou!!  You are both kind, loving people....enjoy the rest of your time in Canada.  Hope we see you in the Uk in Dec. 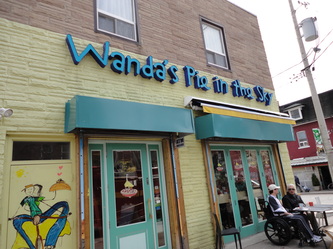 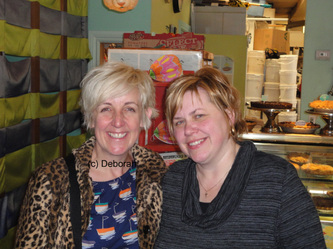 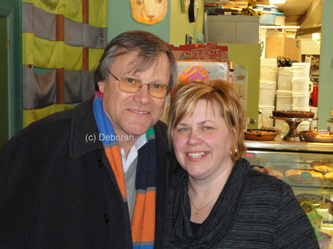 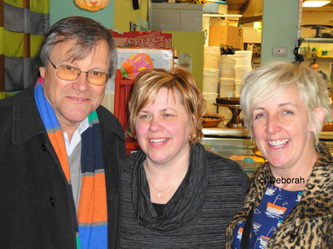 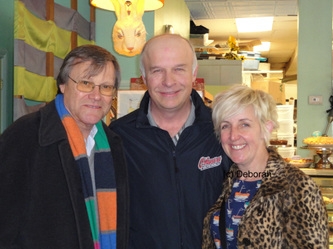 **** Since this fabulous show, I have attended three more Stroll Promotion Shows.  To read about them click on the links.